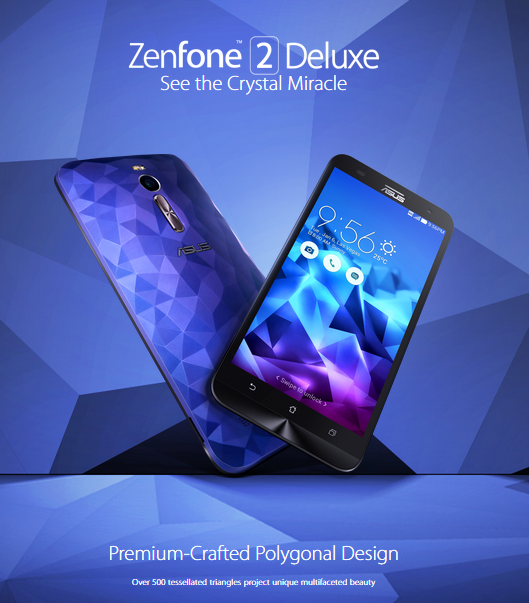 GSM Arena reports that the latest reiteration and enhanced version of the Zenfone 2 model released in March, stands out with its polygonal design that combines more than 500 triangles in white, blue and red to create a tessellated crystal-like effect for the back panel.

Another main difference between the two are the internal memory from 3GB to 4GB RAM and upgraded base storage of 64GB which is expandable of up to 128GB. The memory can be further added with another 128GB via memory card.

The display comes in at 5.5-inch touchscreen with 1080×1920 pixels resolution covered in Corning Gorilla Glass 3 on top. It also has 3.3mm bezel that gives the screen 178-degree viewing angle and 72 percent screen-to-body ratio. The touch response is rated to be at 60ms by the company with OpenGL 3.0 for better experience while playing games.

While the camera has a back lens of 13-megapixel PixelMaster with f/2.0 wide-aperture lens and so-called “real tone” flash. The front shutter is 5-megapixel with 85-degree viewing angle. Although the video resolution is not listed, it is expected to be still at 1080p maximum.

Under the hood, it is powered by Intel Atom Z3580 at 2.3GHz quad-core processor with Android 5.0 for operating system incorporated with Asus Zen User Interface. The battery has a capacity of 3,000 mAh that allows for BoostMaster fast charging or 60 percent battery life in a short span of 39 minutes.

For more features, it has Proximity sensor, Accelerometer and Ambient light sensor.

According to Times of India, Zenfone 2 Deluxe starts to retail at the price tag of Rs 22,999.