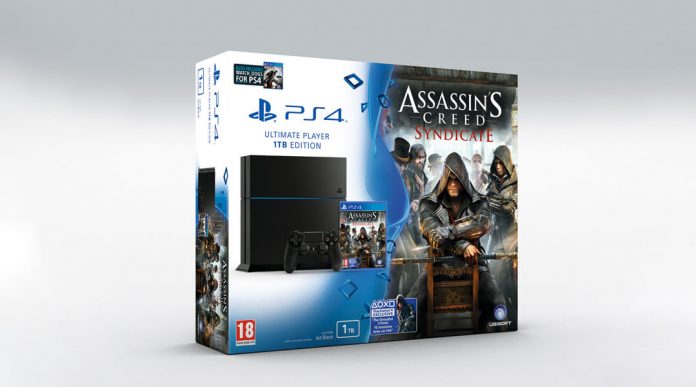 Sony recently announced yet another PS4 Bundle that, this time, will come along with the release of the new game, Assassin’s Creed: Syndicate.

As detailed by the official PlayStation Blog, the Assassin’s Creed: Syndicate PS4 bundle will include a Jet Black PS4 coupled with one DUALSHOCK 4 wireless controller, with 1TB built-in storage capacity, as well as a physical copy of the game Assassin’s Creed: Syndicate. Additionally, players who avail of the console bundle will be given a free digital download of Watch_Dogs, completely for free.

Moreover, players who will play Assassin’s Creed: Syndicate on the PS4 will be getting an exclusive treat. Everyonenot just those who pre-ordered or have availed the PS4 bundlewill have exclusive access to ten Penny Dreadful-themed missions, collectively known as “The Dreadful Crimes”.

The story of “The Dreadful Crimes” is described as: “In 19th-century London, a curious affection for thrilling mystery stories exploded across the city. These weekly pocket novels, dubbed ‘Penny Dreadfuls’, became massively popular among the working class population and focused on titillating sensationalised crimes.”

The Dreadful Crimes Mission Pack tells the story of young detective story connoisseur Artie, and his partner, the famous Penny Dreadful journalist Henry Raymond, as they tackle the “most sordid crimes” that plague London on all sides and levels. Players will be playing either one of the Frye twins, and will be able to engage an enhanced version of Eagle Vision to uncover pertinent details and clues and rebuild crime scenes.

Put on the detective hat, as interrogation skills, keen details attention, as well as deductive skills are needed to successfully uncover the culprit. Upon successful confrontation of the culprit, a big reward will be awarded to the player. Be careful thoughas wrongly accusing a person will result in a big cut from the reward!

The Dreadful Crimes Mission Pack will be available exclusively for the PS4 version, and will be released simultaneously with Assassin’s Creed Syndicate on October 23.