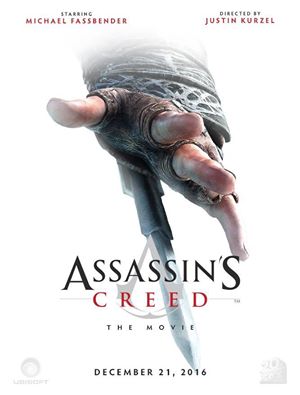 According to Deadline, Jeremy Irons and Brendan Gleeson have been added to the cast to play key roles in the film.

A new story will be created for the film with Michael Fassbender playing a dual role the lead character of Callum Lynch, a modern day protagonist and 15<sup>th century assassin Aguilar, who happens to be his ancestor.

According to a report from Gamingbolt, Ubisoft has assured the fandom that the movie will be part of the same universe as the games, making constant references to its source material. However, it will have a new story. This allows filmmakers some creative freedom to make a great cinematic feature yet at the same time maintain a consistency with the established franchise that fans have come to love.

Based on the official synopsis for the movie released by film distributor 20<sup>th Century Fox, the story will revolve around the character of Callum Lynch, who experiences the adventures of his ancestor, Aguilar, in 15th Century Spain, with the use of revolutionary technology. Callum discovers he is descended from a mysterious secret society, the Assassins, and amasses incredible knowledge and skills to take on the oppressive and powerful Templar organization in the present day.

Recently, photos of Callum Lynch’s official costumes for the movie and character is seen wearing detailed cloak similar to those being sported by the character in the video game.According to reports, filming is expected to begin soon in locations like Malta, London and Spain.

The film, to be directed by Justin Kurzel (Macbeth), is expected to be released December 21, 2016.

“I just think that there’s one thing Justin should be doing, and that’s directing. He’s fantastic with actors and each department. He’s a real heavyweight,” Fassbender said in interview about his director.

'Penny Dreadful' season 4 renewal not happening as series wraps up...