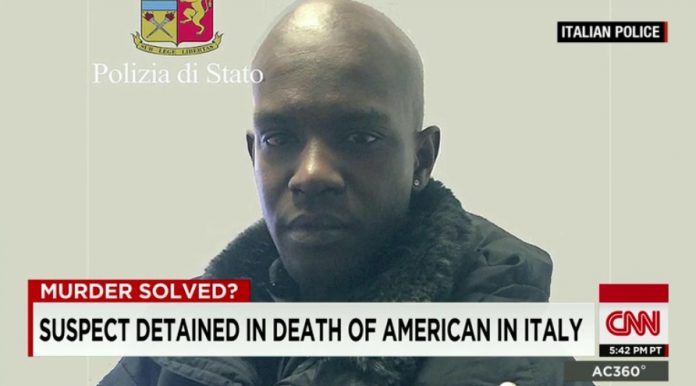 Authorities announced on Jan. 14 that they have arrested a Senegalese man in connection to the death of Ashley Olsen, a 35-year-old American woman living in Florence who was found dead in her apartment on Jan. 9. Olsen apparently suffered two fractures to the skull before being strangled. Later autopsy reports showed that she was strangled with either a cord or a rope.

According to New York Daily News, the suspect is 27-year old Cheik Tidiane Diaw. He was reportedly living in Florence illegally, according to Giuseppe Creazzo, Florence chief prosecutor. Creazzo said that testimony from witnesses and footages from street cameras confirmed that Olsen and Diaw met for the first time early on Friday, Jan. 8, at the Montecarla club in Florence. They went home to Olsen’s apartment afterwards.

What led authorities to Diaw was an analysis of the DNA evidence found under Olsen’s fingernails as well as a cigarette butt and a used condom found in her apartment.

Diaw is accused of aggravated homicide due to the severity of the crime and the compromised state of Olsen.

His lawyer, Antonio Voce, said that Diaw reacted badly after being pushed out of her apartment. He punched her in the neck and pushed her to the ground where she hit her head. He allegedly helped Olsen to her bed but never strangled her, according to Voce.

Olsen was originally from Florida and went to Florence to be closer to her architect father who worked for the Florence Art School Bianca Cappello.

She was found naked in her bedroom with marks on her neck, which authorities in the beginning already suspected she may have been strangled. Her Italian boyfriend, Federico Fiorentini, found her body and alerted the police.

Fiorentini, a 40-year-old painter, told the authorities that he had not spoken with Olsen for three days after their fight. He, then, tried to contact her but she did not respond to phone calls or messages. He went to her apartment and asked the landlady to open her door where she was found.

Many of Olsen’s friends and expatriates were first concerned whether this case would become like the 2007 Meredith Kercher case in which a British exchange student was murdered in Umbria after multiple stab wounds to the neck. Kercher’s American roommate, Amanda Knox, and her Italian boyfriend, Raffaele Sollecito, were originally convicted of murder. Knox and Sollecito were then acquitted, convicted again until a judge threw out the guilty verdicts in 2015.

People describe Olsen as a quiet but friendly person and often saw her walking her pet beagle, Scout, throughout the city.