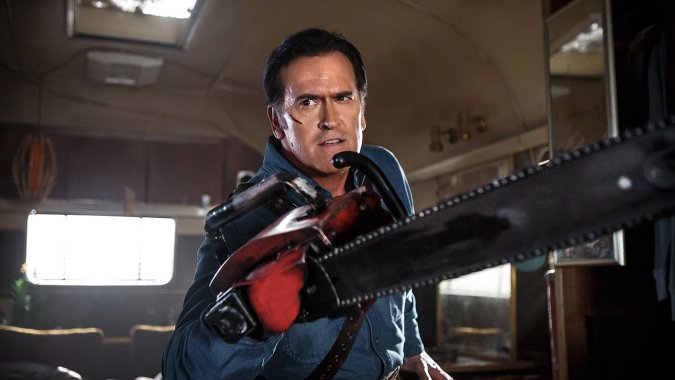 Excited fans of the “Evil Dead” franchise who are in the United Kingdom are in for a real treat. Virgin Media, a U.K.-based company that provides fixed and mobile telephone, television and broadband Internet services, exclusively airs the “Ash vs Evil Dead” TV series in the U.K.. It is also offered on On Demand, according to reports from Techradar.

In a conversation with The Hollywood Reporter, David Bouchier, Chief Digital Entertainment Officer at Virgin Media, said, “We are very excited about bringing ‘Ash vs Evil Dead’ to the UK, exclusively for Virgin Media customers. This long-awaited and much anticipated series marks a step-change in our TV programming strategy and demonstrates the true potential for video on demand.”

It can be recalled that in November, Virgin Media has been awarded the rights to exclusively carry the show in their network for the U.K. fans. They posted a tweet about it with a preview video and the Virgin Media logo seen toward the end of the clip.

From Dec. 1, the show is accessible to Virgin Media “More TV” and above subscribers and also for HD to TV XL subscribers.

“Ash vs. Evil Dead” is an American comedy horror television series developed by Sam Raimi, Ivan Raimi and Tom Spezialy and is currently shown via the Starz network. The show is based on the “Evil Dead” horror film franchise, which was also created by Raimi.

Bruce Campbell stars as Ashley “Ash” J. Williams who, in the TV series, has tried avoiding the terrors of the “Evil Dead” for 30 years until he becomes humanity’s last fervent hope of survival when a Deadite plague hits the face of the Earth.

'Rick and Morty' season 3 release date: To be released in...