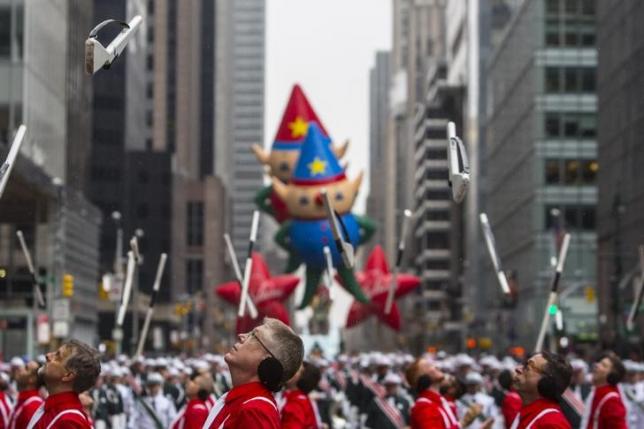 David Huddle and his daughter Megan, a flute player for the North Hardin High School marching band in Kentucky, have been preparing for more than a year for the band’s performance in the Macy’s Thanksgiving Day Parade in New York.

They have no intention of letting threats of further violence from the militant Islamic State deter them from making the trip.

“The main goal of a terrorist attack is to create terror,” David Huddle said in a phone interview. “It’s important to go on with your life. You can’t dwell on it or you’ll never be happy.”

Millions of New Yorkers and tourists are expected to line the streets on Thursday for the parade, more than a week after Islamic State, also known as ISIS or ISIL, released a video showing images of New York juxtaposed with a scene depicting a suicide bomber preparing for an attack.

The group has claimed responsibility for the simultaneous attacks in Paris on Nov. 13 that killed at least 130 people at a soccer stadium, a concert hall, bars and restaurants.

Some people said on Facebook and Twitter they would skip the parade this year in light of the new threats, 14 years after the Sept. 11, 2001, attacks by al Qaeda that destroyed the World Trade Center in Manhattan.

A school district on New York’s Long Island called off a planned December middle-school trip to Manhattan, while Penn State University said it would cancel some student trips to Washington, D.C., and New York.

But New York City officials have a simple response: Don’t be scared.

“We can’t change who we are,” Mayor Bill de Blasio said at a public event on Thursday, urging people not to alter their daily lives. “Do we want to play their game? Do we want to give in to them?”

While they haven’t given much operational detail, de Blasio and Police Commissioner William Bratton said thousands of police officers will be out in force on Thursday during the parade, which typically draws millions to the streets of Manhattan.

Security efforts will be bolstered by a new counter-terrorism unit, Critical Response Command, that includes more heavily armed officers. Another unit created this year to respond to large protests and other incidents requiring more manpower will also assist patrol officers.

Bratton said people should feel confident that the department is able to handle any threat. His own grandchildren are visiting New York for the first time next week and will attend the parade, he said.

“Celebrate, be aware, but do not be afraid,” he said at a press conference this week to address the Islamic State video. “The NYPD will protect you.”

City officials also said the footage shown in the Islamic State video is old and that there is no evidence of a “specific and credible threat” to New York.

Holly Thomas, a spokeswoman for Macy’s Inc (M.N), also offered reassurance. “As with any public event in New York City, security elements are extensive – from the very visible presence of law enforcement officers to wide-ranging behind-the-scenes security operations,” she said.

Some youth groups headed to New York have sought to reassure parents regarding their children’s safety.

Organizers for the North Hardin band, for instance, have sent parents a note in light of the “current world situation” outlining the procedures in place, including chaperones and an emergency texting service.

Huddle said some parents had asked about increased security measures, but that the entire band still planned to travel.

Brad Pollock, the director for the Nogales High School marching band in southern California, said his students were still excited to perform in the parade.

“We’re doing the best we can to keep everybody safe,” he said. “It’s a very special honor to be able to do it.”