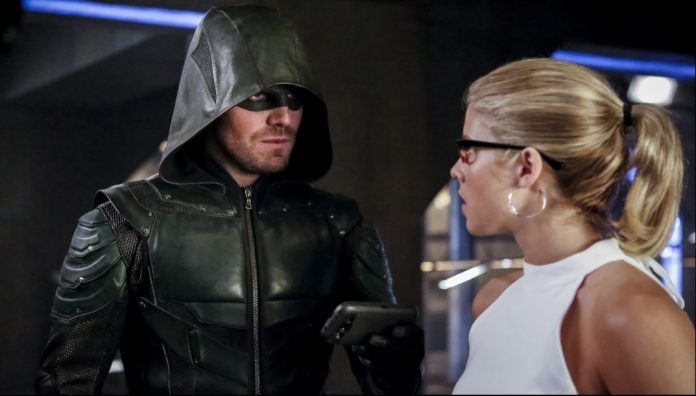 This week on “Arrow,” Prometheus caused panic in the streets of Star City, and towards the end of the hour, it appeared that the show revealed the villain’s true identity.

Prometheus made headlines after reports of a “throwing star killer” made the rounds, and this caused Oliver (Stephen Amell), Felicity (Emily Bett Rickards) and the rest of the team to be on edge. Not helping matters is the divide in the Arrow team, as the recruits complained about being not in the loop with regard to all the information surrounding the villain.

When Prometheus started killing seemingly random citizens, Felicity was tasked to find the connections, and they found out that the names of the victims form anagrams of names from Oliver’s hit list. Evelyn (Madison McLaughlin) was shocked when she learned about the list, but she changed her mind when Oliver saved her, and she even apologized for being a brat.

Felicity stole a piece of evidence from Billy’s (Tyler Ritter) desk, and later, she came clean and told her boyfriend that she works with the Green Arrow. Billy took the news quite well, and later, Felicity figured out that the throwing stars were made out of the Green Arrow’s melted down arrows. At the end of the episode, a hungover Quentin (Paul Blackthorne) woke up and moved one of the throwing stars next to him.

Next week, the Green Arrow comes face-to-face with a gun-toting character. In the episode titled “Vigilante,” Oliver realizes that there is a new vigilante in Star City when the bodies of two criminals are dropped at the Star City Police Department. Because of this new development, the team is split about whether they should stop someone who is trying to help keep the city safe.

In the promo for the episode, Oliver tells the team that they are fighting a war on two fronts, and later, he and the masked vigilante come face-to-face.

“This is a war. You’re not getting the job done,” said the vigilante. The Green Arrow restrains him and says, “This is a war. But I’m gonna fight it the right way. Because I’m all this city has.”