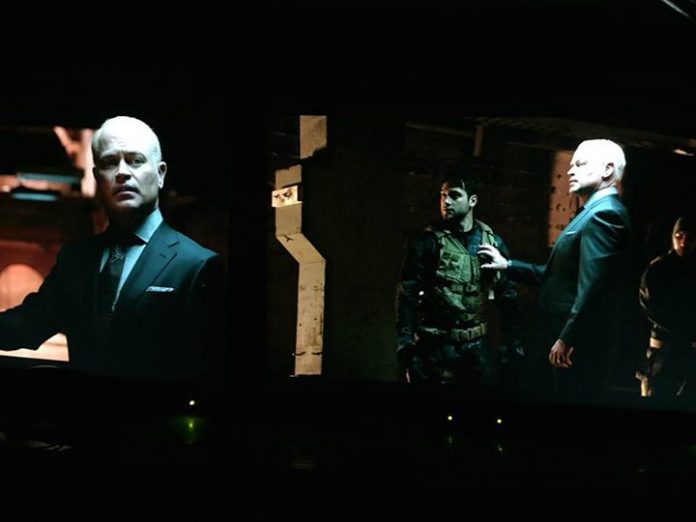 Arrow is returning for its fourth season, and fans can expect that the new season to move faster than ever, with the early introduction of the season’s main villain, Damien Darhk, played by actor Neal McDonough.

Paul Blackthorne (Captain Quentin Lance) recently shared on his official Facebook page the very first set photo of Neal McDonough as Damien Darhk. The photo showed what looks to be footages of the character in the editing room. The caption read: “Nice to be working with Neal McDonough this season…”

Damien Darhk was already teased during the last season’s finale, where he was revealed to be at Starling City, as Ra’s al Ghul (played by Matt Nable) sought to bring him down for good. Darhk was introduced as the long-time rival of Matt Nable’s character to the throne of Ra’s al Ghul.

Arrow Executive Producer and co-showrunner Marc Guggenheim talked to Access Hollywood about the character of Damien Darhk, and how he differs from all previous show villains.

“Damien’s a different kind of villain than we’ve had on the show before,” Guggenheim said. “He’s not as centurion as Ra’s, he’s not as looney tune as Slade, he’s not as — and people will be surprised I use this word — but he’s not as noble as Malcolm Merlyn. He’s pure evil. We wanted someone who was truly, truly malevolent. We’ve never done that on the show before. All of our big bads always thought they were doing… the wrong thing for the right reason. This guy does the wrong thing for the wrong reasons.”

“It’s a bad situation to have this guy coming in. And the other thing that we’re doing that’s different is in past seasons, you’ve had to wait ’til usually the mid-season finale to meet the big bad and have Oliver confront the big bad. We are coming out of the gate strong. We’re not waiting and actually, that itself has really energized the show and it infuses even the ‘villain of the week’ episodes with an epic-ness that they wouldn’t otherwise have,” he added.