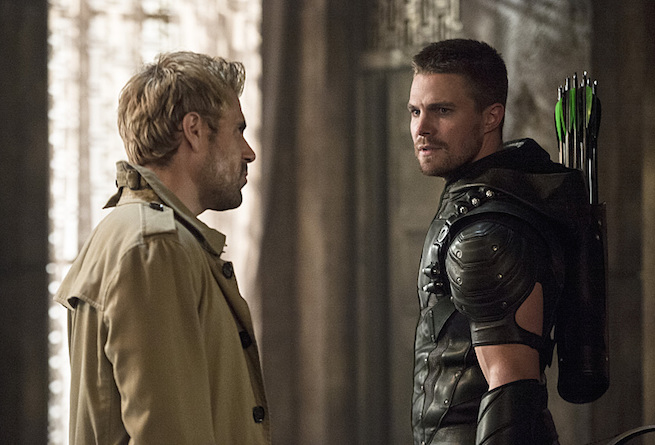 Upcoming episode five, entitled “Haunted”, of the hit CW superhero themed “Arrow” show has been leaked online giving fans a glimpse of what is set to happen next in Starling City.

DC comics’ character, John Constantine, who was played by Matt Ryan in his own series based on the comic book star before it was cancelled by NBC earlier this year is back in action as he visits Starling City to save Sarah’s soul.

Sarah, whose soul has been taken over and controlled by the Lazarus Pit side effects, will be shown in the episode on a random murdering spree and it will take a lot of effort and time before she can come out of it. This is where Constantine will take the center stage and try to save not only Sarah’s soul but also a lot of people who are put in danger by her killing binge. Prior to the episode leakage, spoilers have already revealed that there is an unusual link between Constantine and The Arrow/Oliver.

In a producer’s review published in the website comicbook.com, writer and producer for the show, Wendy Mericle expressed her excitement for the crossover. “We’re very excited that the only solution for doing that is bringing on John Constantine and he’s going to be the key to bringing Sara back and bringing her soul back. We feel very lucky, Constantine is a favorite character of the comic book fans watching our show and it’s just a fun, different dynamic to have on the show.”

Based on the piracy tracking company Excipio and as reported by the website The Mirror UK, the new episode of “Arrow” has been downloaded 11,677 times after it was leaked over the weekend. Allegedly, the video footage was taken from a press screening by the CW Network who invited journalists and reviewers earlier last week to preview the new episode and give feedback.

“Arrow” airs every Wednesday on The CW.

Kingdom Hearts 3: will Captain America be latest character for the...