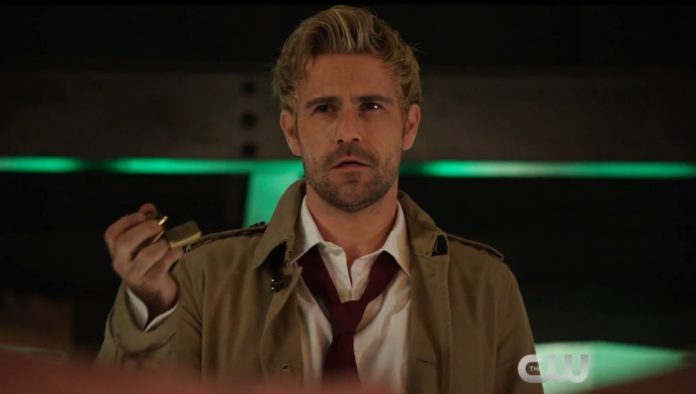 For those who were saddened by the cancellation of the television series “Constantine” on NBC, The CW just released some preview photos for its next episode that will feature Matt Ryan as John Constantine again.

The official synopsis of the episode titled “Haunted,” as posted on The Futon Critic, reads, “When things take a turn for the worse with Sara (guest star Caity Lotz), Oliver (Stephen Amell) calls in a favor from an old friend who deals in the mystical, John Constantine (guest star Matt Ryan). John Badham directed the episode written by Brian Ford Sullivan & Oscar Balderrama.”

The photos posted on TV Line show the demon hunter and occult master fighting alongside Oliver and Laurel somewhere that looks like the League of Assassins’ headquarters, Nanda Parbat. Other photos show Constantine doing a ritual wherein Quentin Lance (Paul Blackthorne) is present.

In the 45-second trailer released by CW for the upcoming episode, Oliver calls Constantine to help restore the soul of Sara, who is hunting down Thea Queen (Willa Holland).

Back in May 2015, “Constantine” showrunner Daniel Cerone announced via Twitter that the show was not ordered by NBC for a second season.

Likewise, lead actor Ryan said through Twitter that he was disappointed about the cancellation and that he would miss portraying the character.

In an effort to save the show, Amell tweeted, “#SaveConstantine — Hey TV Networks / Netflix and the like… If you pick up the show, I’ll guest star.”

This was followed by an exchange of tweets between the two actors. It seems that the “Arrow” star’s campaign to include Constantine in the Green Arrow universe has paid off.