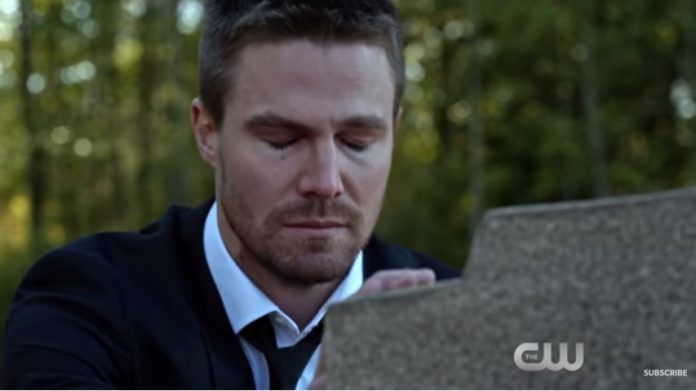 While the fans of “Arrow” will be seeing Oliver Queen (Stephen Amell) and the team gather around for the funeral of Laurel Lance (Katie Cassidy) in the upcoming episode 19, titled “Canary Cry,” of the TV series’ season 4, many are reeling with excitement with the return of Felicity Smoak (Emily Bett Rickards) to the scene.

Asked if the mysterious death of Lance has any connection to the reappearance of Felicity, “Arrow” executive producer Marc Guggenheim said in an interview with TV Line, “We never had to kill Laurel to make Oliver and Felicity a couple. That is really independent from the romantic history that Oliver and Laurel had, and a completely different set of dynamics.”

Felicity started as the girlfriend of Oliver who eventually broke up with him and consequently turned her back on Team Arrow after learning the latter’s lies. Guggenheim told TV Line that one of the choices she made to leave Oliver or to leave Team Arrow will be undone in the upcoming episode.

“She could come back to the team, and that does not mean that she’s back together with Oliver,” said showrunner Wendy Mericle to the same news outlet. Fans will have to see if “Olicity” will return, or if Team Arrow will be back in number following Lance’s death.

Considering the Felicity’s value to the team, it can be anticipated that she is leaning toward rejoining the Arrow Team. Mericle even added, “We started off this season with Felicity really wanting to come back and do this because she herself enjoys this kind of vigilante lifestyle, but that is separate from Oliver.”

However, Guggenheim continues to tease “Olicity” shippers by saying, “People will have to see if things change or not change.” The character of Felicity has earned popularity throughout the series and many are guessing she would be playing an even bigger role upon her return.

Whichever Felicity chooses, fans will have to find out when “Arrow” season 4, episode 19 airs on Wednesday, April 27, at 8 p.m. EDT on The CW.

'Game of Thrones' season 7 spoilers: who will be the antagonist?