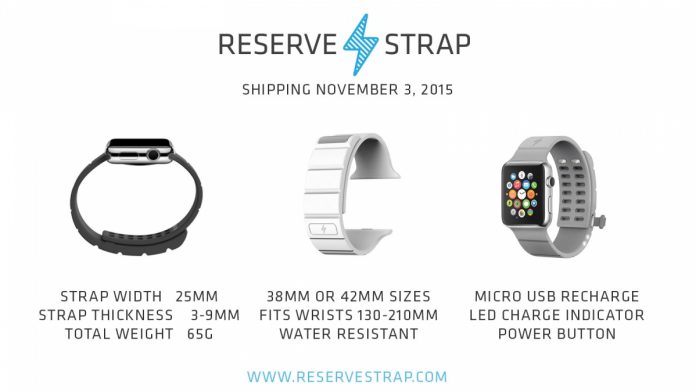 Reserve Strap has announced recently that it will be available for shipping starting on November 3 for users of Apple Watch who wish to have longer battery life.

Taking the news on its official blog, the strap is said to be the only indispensable accessory that allows the watch to be recharged while a person is wearing it. Using the battery embedded to the strap, it adds 167 percent more usage or up to more than 30 hours of battery life.

If the Apple Watch can usually be used to its maximum of 18 hours, with the help of Reserve Strap, the battery may be extended up to 48 hours, the report claimed. With the additional usage, the device directly addressed the concern raised by some consumers who said that they cannot make it through the day using Apple Watch with a single charge.

Other features include: water resistance; does not interfere with the sensor of the watch; includes micro-USB for charging with one-touch charge initiator; and full compliance to AppleCare Warranty and Band Design guidelines.

The strap made with “Specialized Thermoset Elastomer Silicone” also comes in three colors, white, grey and black, can support either Apple Watch that is 38mm or 42mm in size and promises to fit wrists from 130 to 210 mm.

Initial charging time using the strap is 60-75 minutes but if the user prefers to wear the strap and not change using other bands, the watch will retain 100 percent of battery life until the power is depleted from the strap.

According to Mac Rumors, developers Lane Musgrave and John Arrow have attempted twice to create the right design and functionality before releasing the final one. The original design which debuted on March, only boosts the battery up to 125 percent.

Users who may want to avail of Reserve Strap have to pre-order for a guaranteed arrival of the device on November. Retail price is at $249.99 with an express free shipping to United States while a flat rate of $20 in any parts of the world.