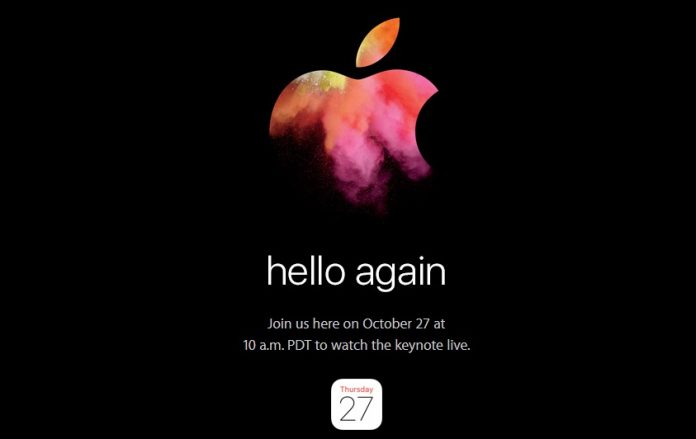 Apple has been quite preoccupied as of late after announcing their upcoming keynote to be held later this week. The company sent out invitations to members of the press for them to witness the company’s unveiling of their next-generation products.

Rumors are substantially rife that Apple will finally be launching their newest MacBook laptops including the once believed to be dead MacBook Air. This is due to the promotional ad for the upcoming event that made Apple fanatics and tech pundits presume as such.

As per the promo photo, the famed logo of the company can be partly seen painted with various shades and is placed on a black backdrop. Moreover, the phrase “hello again” can also be seen in the poster. It is striking similar to the ad that the company released when its founder presented to the world the Macintosh.

With that said, it’s also plausible that the forthcoming event might include a refreshed iMac since it was one of the no-shows during last month’s iPhone 7 reveal.

It was previously revealed that Oct. 27 was initially reserved for Apple’s fourth quarter earnings call. However, due to conflicts in their schedule, the said meeting was moved a couple of days earlier. This gave way for the abovementioned product launch. It is speculated that albeit the success of the recently released iPhone 7, the numbers to be reported by the company to its investors doesn’t seem to add up to their expected target. Hence, Apple might have thought that it’s better to dole out the bad news first rather than have it the other way around.

Fans are keeping their fingers crossed that a device or two from the MacBook lineup would show up at the keynote this coming Thursday.

NVIDIA Pascal GPUs rumored to be unveiled in April at GPU...