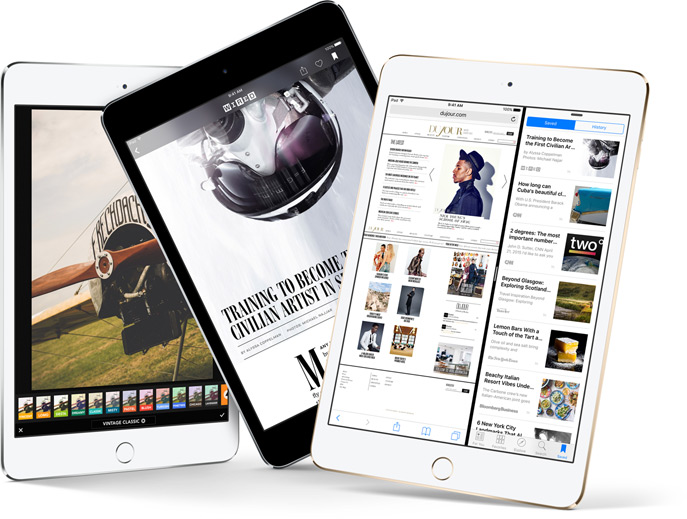 Mighty and small are the words used by Apple to describe the new iPad mini 4. True enough, when the specs of the newest member of the iPad family were released, no one can say that it is not a big update compared to its forgettable predecessor, the iPad mini 3.

At 6.1mm thin and 0.65 pound light, the iPad Mini 4 is 18% thinner than the previous model. According to Apple, even though the new tablet is lighter and thinner, it is still durable. The aluminum unibody design is built to last for years. Moreover, because it is not bulky, the new iPad mini can fit into anything. From campsites to airplanes, the tablet can be brought anywhere and everywhere.

Apart from the design improvements, Apple’s new device is also environmentally friendly. Some of the green materials used to manufacture the device are mercury-free LCD display, recyclable aluminum enclosure, and arsenic-free display glass.

In terms of display, the new hardware from Apple boasts a 7.9-inch Retina display with 2048 x 1536 resolution or 3.1 million pixels. Although the resolution is the same as the previous model, the new iPad’s display is no longer built with three different and separate components. Apple is now using a fully laminated display that gives up to 44 percent more color saturation therefore making texts sharper and images more vivid and be more lifelike.

What’s more, according to the product’s website, the screen’s sensitivity has been improved to enhance the response time of gestures. Actions such as playing games and swiping from one home screen to another will be quicker and more natural.

The iPad mini 4 is also equipped with a custom-design antireflective coating to reduce glare by up to 56 percent. Therefore, even if the room is too bright, the content shown on the screen will still be readable and clear.

Unlike the iPad mini 3 which was powered by an A7 processor just like the iPad mini 2, the fourth one in the mini line comes with an A8 chip with second-generation 64-bit desktop-class architecture according to Apple. Launching apps, playing games, and loading websites are up to 30 percent faster. In addition, Apple claims that because of the A8 chip, graphics that can only be played or loaded on desktop computers before can run superbly on the new iPad.

Power efficiency is another benefit of the new processor inside the iPad mini 4. Battery life can last up to 10 hours. This can be further improved with the help of the M8 coprocessor that continuously measures data to relieve data from the A8 chip. Some of the sensors the coprocessor uses to calibrate data are the gyroscope, compass, and accelerometer.

Called the iSight camera, the rear facing camera of the iPad mini 4 has an 8MP sensor. It can take pictures of up to 3264 x 2448 in resolution and 1080p HD videos. Features of the camera app include exposure control, time-lapse video, burst more, timer mode, high-resolution panorama, and 120-fps slo-mo. On the other hand, the front facing or Face Time camera has a sensor of 1.2MP, and it can record 720p HD videos.

The new iPad mini is equipped with Apple’s Touch ID technology. With one finger on the Home button, the device can be unlocked as long as the print matches the one stored in the iPad. For those who are concerned about their personal information, Apple said on their website that information such as passcode and fingerprint data are not backed up to iCloud.