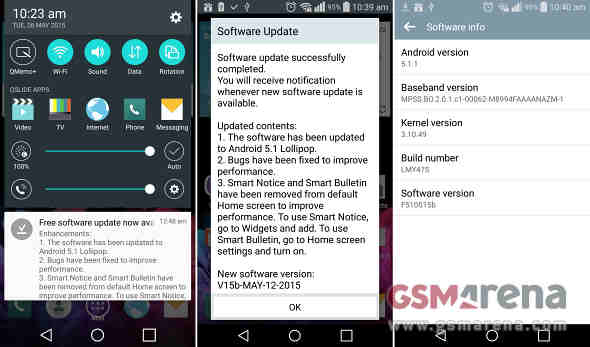 It’s about time for Lollipop to become the dominant Android version booted by users. With Google’s latest Android M already confirmed and announced, the current Android Lollipop started to roll out to devices via over-the-air (OTA) updates.

The latest Android firmware previously came to the LG G Flex 2. The phone received the update even before the flagships LG G3 and G4. South Korean users of the phone received the 5.1 version of Lollipop update through OTA, with a software version F510S15b, dated May 12. The update brought to users all the core features and functions of the Android Lollipop. LG also promised that there have been certain bug fixes on the software that is guaranteed to improve the performance of the LG G Flex 2.

In a report at Android Origin, one of the changes noticeable after the update is the removal of the Smart Notice and the Smart Bulletin from the home screen by default. The South Korean mobile company said that this was to boost the phone’s performance, since there have been complaints of the phone’s launcher performance issues, possibly caused by the aforementioned widgets.

Meanwhile, Android Lollipop also started rolling out to a number of Samsung devices, via OTA update, too. In a collected report by International Business Times, Samsung’s Galaxy Note 4, Galaxy S6, and the Galaxy S6 Edge are in line to receive the 5.1 update of the operating system. It is expected that the Galaxy Note 4 will receive its update starting late July. The Galaxy S5 (model number SM-G900), on the other hand, will get its 5.0.2 software update this month, together with some bug fixes and improvements on overall performance. Lastly, the Galaxy Tab S 8.4 LTE will also be getting its update to Android 5.0.2 Lollipop. The update also has all the core features and functions of the software, along with bug fixes and performance improvements, too.

Currently, almost 10% of overall Android users run their device under the Lollipop version.