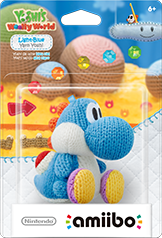 The concept of Amiibo made a hit when Nintendo introduced the “toys-to-life” for its Wii U and Nintendo 3DS platforms. Nintendo just keeps on adding different characters and for those who are avid collectors of the figurines, the good news is that there will be more coming.

Three brand new Yarn Yoshi amiibo will be launched today, coming in three colors, one of which is an exclusive bundle. The Blue and Pink Yarn Yoshi costs $16.99 and can be bought separately, while the Green Yoshi is an exclusive bundle for the Wii U exclusive game, Yoshi’s Wolly World, and costs $59.99. Getting the bundle may be the better option as the game itself costs $49.99, making the Green Yoshi cost only about $10.

Aside from its adorable design, the Yoshi amiibo can also be scanned into the game in order to activate a second Yoshi or “double Yoshi” to help in single-player games. There is also an option to save the preferred Yoshi pattern to any of the amiibos and partner it with the “double Yoshi” when playing co-op, notes Heavy. To add to its features, the yarn Yoshi can also change its clothes to other Nintendo characters such as Mario and Donkey Kong to name a few.

On the other hand, Yoshi Yolly World, the game to where the yarn amiibos will be released along with, will be playing along the storyline of the two remaining Yoshis to save the world and restore their friends from the evil spell that the villain Kamek cast upon the rest and turned them into yarns. Fans can also expect that the characters will look like yarns in its graphics in order to make the game more realistic. Aside from these, there will be some influences on the items from Yoshi’s island such as the mystery clouds and the smiling flowers. The game can be played through single player or two players in Classic mode or Mellow mode.

Are you excited for the Yarn amiibos and Yoshi Yolly World?

'Fallout 4' Far Harbor DLC guide: How to own any weapon...