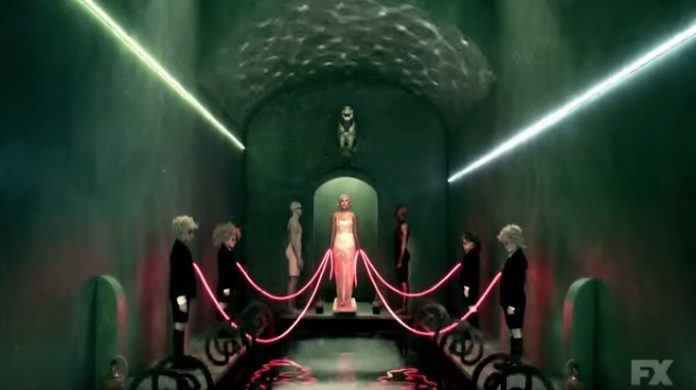 The upcoming “American Horror Story: Hotel” teaser stars Lady Gaga as The Countess who owns the Hotel Cortez. A new teaser for the show, entitled “Above & Below,” features the singer in macabre scenes with elements such as creepy children, freakish bald men, and blood.

Gaga shared the video on her Twitter saying, “Let the Countdown Begin #AHSHotel #3weeks – The Countess.”

The description for the video reads, “Behold. Beware. The Countess.” The latest teaser for the show is reminiscent of Gaga’s music videos where she undergoes several outfit changes. She dances in a hallway while children surround her with strange looks on their faces. In another scene, Gaga is shown holding what appears to be the kids’ blood supply in neon tubes.

In an interview with Entertainment Weekly, the pop star talked about her character, which hints at Jessica Lange’s previous roles as powerful, domineering women.

Gaga explains, “The Countess is a very old soul. She’s extremely strong. She’s been through so much. It’s kind of impossible for anything to penetrate her. This show in many ways is about her survival and there is an amazing journey that touches on the mythology of viruses and in what way these afflictions change our lives and bring us together and tear us apart.”

Meanwhile showrunner Ryan Murphy revealed that Gaga has filmed a foursome sex scene with Matt Bomer. Murphy commented on Gaga’s boldness saying, “She wanted to do more explicit stuff than was written.”

He added, “You write a foursome for her and you expect a lot of questions. She never did that. She showed up and she was wearing diamond pasties, a Band-Aid on her hoo-ha, heels, and a black veil that Alexander McQueen made for her on the day before his death. Then the crew gasped in delight and we were off!”