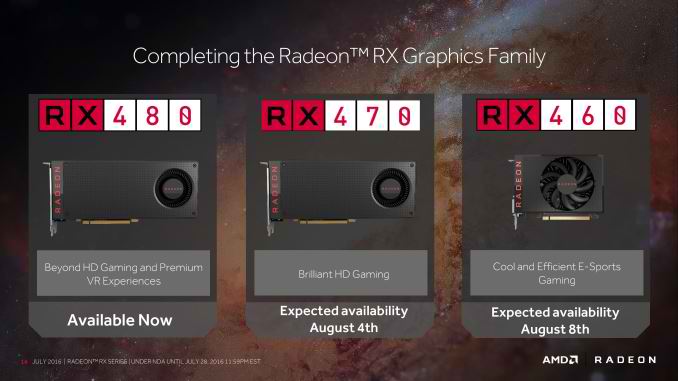 AMD introduced a new set of graphics processing units (GPUs) under the Radeon RX family in the past month. AMD has taken pride in announcing their entire line of Radeon RX 400 series of GPUs all focused on delivering performance without having to cost users too much when it comes to pricing of the chips.

The first one to be announced and made available was the Radeon RX 480 GPU, which delivered top-of-the-line performance, focused on giving support for DirectX 12 and virtual reality (VR) playback and gaming, with a price range that still falls in the affordable category.

Now, the full specifications of the two lower-tier GPUs in the series, the RX 470 and the RX 460, have been announced.

However, despite their full specifications now known, AMD has yet to reveal the price range of the upcoming new GPUs.

“Gamers and consumers today are being left behind,” said Raja Koduri, senior vice president and chief architect, Radeon Technologies Group, AMD. “Today only the top 16 percent of PC gamers are purchasing GPUs that deliver premium VR and Gaming experiences. Hundreds of millions of gamers have been relegated to using outdated technology. Notebook gamers are often forced to compromise. And tens of millions more can only read about incredible PC VR experiences that they can’t enjoy for themselves. That all changes with the Radeon RX Series, placing compelling and advanced high-end gaming and VR technologies within reach of everyone.”