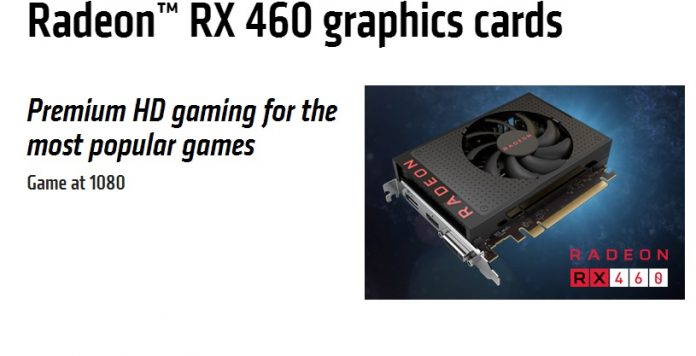 Electronic sports gamers have something to rejoice about now that the AMD Radeon RX 460 has finally arrived. Since most of the widely played titles right now are eSports-themed like “Dota 2,” “Counter-Strike” and the current fad among gamers, “Overwatch,” one of the factors that contributed to its popularity is that most of them can run on a PC with fair specifications, not to mention an entry-level graphics card just like the newly released Radeon RX 460.

This latest offering from AMD will be perfect for gamers who want to have a decent-performing graphics card that is also light on the pocket.

The graphics card was built using Polaris, the fourth generation graphics core next (GCN) architecture that is currently followed by AMD’s cards. The card has a total of 14 compute units and 896 stream processors. Moreover, its base and boost speeds were clocked at 1,090 and 1,200 MHz, respectively. The memory clock speed, on the other hand, has speeds reaching up to 1,750 MHz.

The graphics card’s peak performance could go speeds of up to 2.2 teraflops which could translate to playing games with a frame rate of 90 frames per second (fps) on a 1080-pixel resolution, which is not bad for such card. In addition, it has a lower thermal design power (TDP) of 75 watts which is just perfect for those gamers who worry about power-hungry graphics cards. Furthermore, the card also has high-definition multimedia interface version 2.0 (HDMI) and DisplayPort version 1.4 connectors.

Price for the RX 460 starts at $100 depending on the amount of video random access memory (VRAM) that goes with it.

Meanwhile, another graphics card was also released together with the RX 460 which is the Radeon RX 470. The card is considered one of the mid-range cards from AMD which also has a target market of eSports gamers who wants to take their gaming up a notch.

In the end, it’s up to the players which one of these budget-friendly cards would best suit their gaming lifestyle. However, for those who are on a tight budget, the RX 460 is highly recommended.