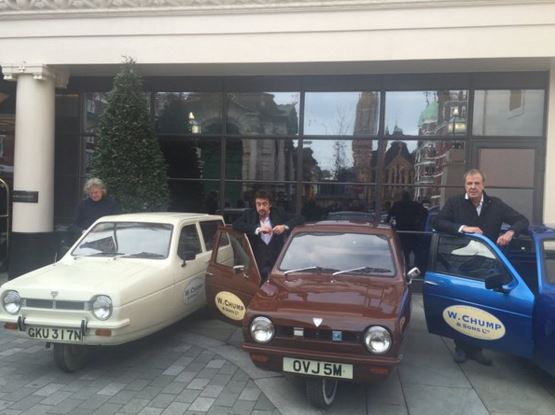 At this point, very little details are still known about Amazon’s “Top Gear,” which is set to air starring trio Jeremy Clarkson, James May, and Richard Hammond.

While fans are looking forward for updates, they are speculating as to what the show may be called. Crossmap revealed that “Gear Knobs” has already been debunked by Clarkson, while “Speed Bird” still remains on the list.

Amazon founder Jeff Bezos continues to remain mum about details pertaining to it. However, he revealed to Telegraph in an exclusive interview earlier this year that the three men are “very, very, very expensive.” He added, “They’re worth a lot, and they know it.” This could imply that the budget for the show is very huge, with New York Post estimating up to $250 million for a three-year 36-episode deal.

Meanwhile, Andy Wilman will return as the executive producer of the show. He seems to confirm the rumor about the huge amount allotted for the show as he told Radio Times that the show will have a budget that will allow them to produce the quality that they want for the program. With this, the car show will be built from scratch as no one is telling them what they can and cannot do in the show. He said, “We’re all really excited,” and added, “It feels really liberating.”

The production of the first season started early October where Clarkson, Hammond, and May hinted through a photo that the show will feature a three-way shootout between the McLaren P1, the Porsche 918 Spyder, and the Ferrari LaFerrari.

It is still uncertain when the first season will air, but according to Broadcast Now, ITV has opted for Twofour to create similar driving format, after Clarkson, Hammond, and May revealed to ITV director of Television Peter Fincham that they are under a gentleman’s agreement until April 2017.

'Fear the Walking Dead' season 2 spoilers: Dangers on the sea...