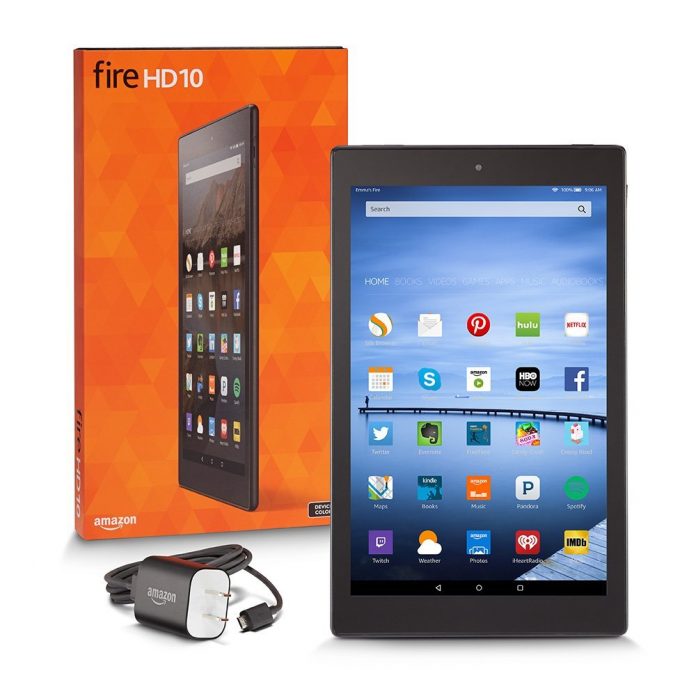 Now available on Amazon for preorder, the Fire HD 10 is the perfect tablet for those looking for an affordable device that can be used to watch videos, read e-books, and listen to music.

Just like the Amazon Fire HD 8, the Fire HD 10 has 1GB RAM coupled with quad-core 1.5 GHz processors. The widescreen display is 10.1″ with a resolution of 1280 x 800 pixels. As for the camera, the new tablet has a 5MP rear camera and HD front one. Battery life is pegged at 8 hours for browsing the Internet, reading, and other activities.

Amazon’s new tablet comes with 16 GB or 32 GB of internal storage. For those who want to add more storage, the Fire HD 10 can be fitted with a microSD card up to 128 GB. Unlimited cloud storage is also available for all content downloaded from Amazon and pictures taken with Fire devices.

What’s different about the Fire HD 10, however, is the enclosure. At just 7.7 mm thick, this tablet is the thinnest one made by Amazon.

According to Engadget, the case is made of glossy plastic like the Lumia 2520 of Nokia. “They feel pretty solid, with little flex when you grip them tightly. Unlike Nokia’s unibody design, though, the Fire HD cases are clearly made out of a few pieces of plastic: the rear portion is glossy, while the plastic that borders the screen is a duller matte finish,” the report adds.

Unfortunately, the tablets are not as fast as the others in the market due to the hardware. The same report on Engadget states that navigating the interface of the Fire OS 5.0 is sluggish. The delay is noticeable especially if the user is used to smartphones and tablets equipped with better hardware.