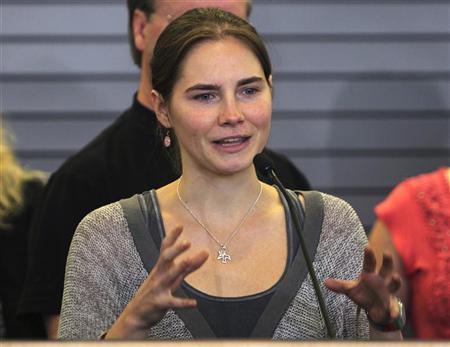 Amanda Knox was finally acquitted of murder in March this year but it was only recently that the Italian High Court released an explanation for the acquittal.

Knox was convicted, acquitted then convicted again over the death of her roommate, Meredith Kercher in the home they shared in Perugia eight years ago, before being finally acquitted again along with her co accused, Raffaele Sollecito, her then boyfriend.  Rudy Guede was convicted of the crime and is in prison serving his sentence.

According to the court document, the main basis for the acquittal was that the police and prosecutors were responsible for “stunning weakness” and “investigative bouts of amnesia.”

It also called to task the lack of biological evidence linking Knox or Sollecito to the scene of the crime. As such, they should not have been held responsible for the killing.

“There was no shortage of glaring errors in the underlying fabric of the sentence in question,” the court document read.

The court also found issue with the alleged murder weapon, which was a kitchen knife that was found in Sollecito’s house contained in a cardboard box, and a bra clasp which was said to have carried DNA evidence but was left on the floor for 46 days.

The court also said that because of the media frenzy involving the case, the focus was placed on offering up “a spasmodic search for one or more guilty parties to offer up to international public opinion which did not aid in the search for the truth,” True Crime reported.

“I am deeply grateful that the Italian Supreme Court has filed its opinion and forcefully declared my innocence. This has been a long struggle for me, my family, my friends, and my supporters. While I am glad it is now over, I will remain forever grateful to the many individuals who gave their time and talents to help me. Today would not have been possible without your unwavering support. I will now begin the rest of my life with one of my goals being to help others who have been wrongfully accused,” Knox wrote on her blog after her eight year ordeal.

Under Italian law, no further prosecution can be pursued in the case.