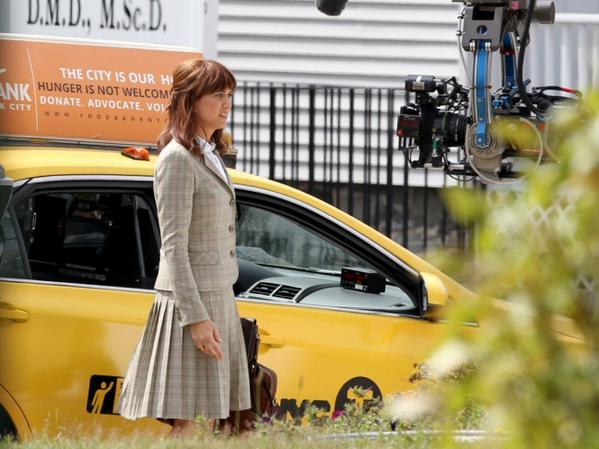 The reboot of the 1984 classic Ghostbusters has started filming in Boston this week and fans are learning more details about the roles of all-female cast, storyline and possible cameos.

Actress Kristen Wiig was spotted wearing a plaid suit and conservative skirt with a matching full bangs hairdo on the set while watching two men fight nearby. According to Fox News, this marks the first look of the movie. Wiig also posted to Twitter the announcement that they started filming last June 17, after teasing a photo of writer Paul Feig holding  green slime which reportedly put fans in an online frenzy.

Boston Herald reported that Wiig will partner with Melissa McCarthy in the movie as they portray authors who have written a book about ghosts. A few years later, Wiig lands a prestigious teaching position at Columbia University but after her book is published, she becomes the laughingstock of the university. However, when supernatural beings invade New York, she teams up with McCarthy, Kate McKinnon and Leslie Jones to save the city and prove that her claims are real.

Aside from the four lead characters, the movie will also star Chris Hemsworth as Kevin, the male counterpart to the receptionist Janine originally played by Annie Potts. According to insiders, Hemsworth was approached early on during casting but originally turned down the offer as he deemed the part too small. Sony reworked the script to give him more parts in the movie, Variety reported.

Meanwhile, creator Dan Aykroyd hinted that it is possible for him to cameo and return as Dr. Raymond “Ray” Stantz.

“That’s up to the director. If asked, I will show up and be of service. If not, it’s totally fine with me. I leave powerful talent like that alone to do their thing.”

Speaking with Spinoff Online, he also said that he thinks that the movie will be a hit, “Yeah, it’s going to be hot! The new one’s going to be big! The interplay, and with each of them, their individual voices are so well defined. They’re just such different characters, and there’s a friction. There’s a dynamic there. I’m not going to spoil it for people, but it’s going to be big, big!”