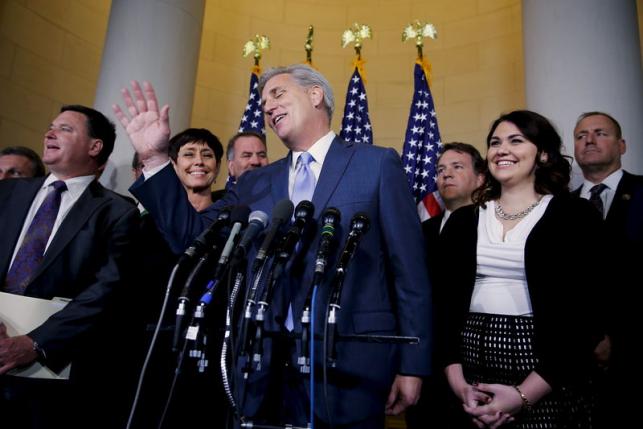 House Ways and Means Committee Chairman Paul Ryan is deciding whether to seek the U.S. House of Representatives’ speaker job, fellow Republican lawmakers said on Friday after they met behind closed doors to try to settle their leadership battle.

Speaking to reporters the day after House Majority Leader Kevin McCarthy abruptly dropped his bid to become speaker, Representative Darrell Issa of California said he had no second choice if Ryan sticks by his announcement on Thursday that he would not seek the post.

“Although he’s ruled himself out, it’s very clear he’s reconsidering,” Issa told reporters as he exited the meeting. “The fact is, his time is now.”

Issa said that if Ryan declines, he himself might seek the job to replace retiring House Speaker John Boehner.

Finding a replacement for Boehner has consumed Republicans as Congress faces a series of pressing decisions, from raising the government’s borrowing authority to funding federal agencies through September.

Further complicating matters is that the House is set to take a recess next week.

The race for speaker of the Republican-dominated House was upended when front-runner McCarthy dropped out, saying he could not get enough support to win. Boehner had planned to leave Congress on Oct. 30 but said he would stay until a replacement is elected.

On Friday, Boehner told Republicans he still expected a vote for his replacement by the end of October, Representative John Fleming said.

Ryan, the 2012 Republican vice presidential nominee, left the meeting saying he had no further comment.

Speaker candidates are Representatives Daniel Webster of Florida and Jason Chaffetz of Utah.

Chaffetz told reporters that he, too, backed Ryan and would drop out if the Wisconsin Republican changed his mind.

Webster has the backing the House Freedom Caucus, a group of about 40 members aligned with the Tea Party movement, which wants to reduce taxes, federal spending and the national debt and budget deficit.

Walter Jones, a Republican congressman from North Carolina, said he supported Webster for the job even as he acknowledged the long odds he faces to win.

“Obviously there’s chaos up here right now, and we’re going to have to see how it works out,” he told CNN.

After the meeting, Representative Charlie Dent, a moderate from Pennsylvania, said there was “lots of soul searching going on,” but “nothing productive happened.”

Neurology news: Childhood emotional abuse may cause migraines during adulthood