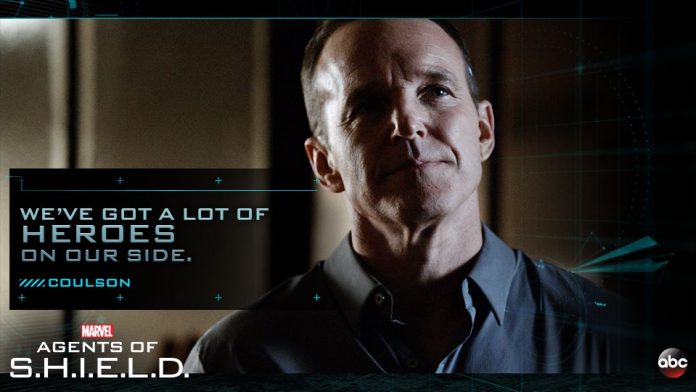 The aftermath of “Captain America: Civil War” now ties in to the events happening in ABC’s “Marvel’s Agents of S.H.I.E.L.D.” as Hive’s (Brett Dalton) plans of human race annihilation continues in the brand new episode of season 3.

Titled “Emancipation,” the last installment before the two-hour special finale features the prophecy Daisy Johnson (Chloe Bennett) has glimpsed before, coming closer to reality. The agents are also hinted to be heading towards a major loss as they are forced to register Inhumans following the battle that separated the Avengers.

In an exclusive sneak peek shared by IGN, Director Phil Coulson (Clark Gregg) talks to Major Talbot (Adrian Pasdar) and discusses the Sokovia Accords from “Civil War” and how they will impact the Inhumans currently working in the agency.

“I’m here because the president sent me,” Talbot says. “Sokovia Accords are in all the lands now and he’s concerned that you may have some undocumented, enhanced assets working for you.” When asked why he thinks so, “Because he’s not a moron. Come on Phil, it’s time for S.H.I.E.L.D. to commit to a goal, re-legitimize,” he answers.

“In exchange to revealing and registering any Inhumans we may have? Not gonna happen,” Coulson retorts. “Why are you so pig-headed? It’s good enough for the Avengers,” Talbot quips to which the former replies with, “Not all of them. Any Avengers operate in the spotlight. We work in the shadows.”

“What’s going on in the shadows, Phil? That’s what I wanna know. You better start opening some doors or I’ll promise you, I’m gonna start kicking them down,” Talbot warns. To his surprise, Coulson says, “Alright, let’s go for a ride.” The clip ends with their seat transformed into an elevator shaft and heads down.

Meanwhile, another footage shows Hive recruiting the so-called Watchdogs to join him despite their reluctance. “Their lives are filled with hatred, now they will find peace with us,” he shared to Daisy. When the latter says that they don’t deserve it, “The Inhumans deserve to be freed from this prison. The emancipation will be my gift to you.”