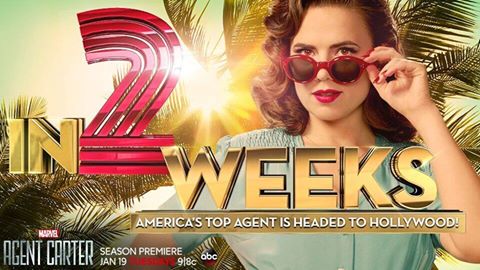 Fans who may be waiting for specific information regarding the second season of ABC’s super spy series “Marvel’s Agent Carter,” may be delighted to know that the full official synopsis for the entire run has been revealed, pointing out possible spoilers for the plot.

According to Comicbook, the unstoppable agent for Strategic Scientific Reserve, Peggy Carter, portrayed by Hayley Atwell, will move to Hollywood where she will be met with a lot of intrigues alongside exciting new adventures.

“Dedicated to the fight against new Atomic Age threats in the wake of World War II, Agent Peggy Carter journeys from New York City to Los Angeles for her most dangerous and bizarre assignment yet,” the description teases.

It turns out that she has been sent by Chad Michael Murray’s Jack Thompson to work with the newly appointed West Coast SSR Chief Daniel Sousa (Enver Gjokaj) to investigate a homicide involving a body that glows and emanates cold.

Her new assignment will reunite her with Howard Stark (Dominic Cooper) and his trusty sidekick Edwin Jarvis, played by James D’ Arcy. She will also meet Jarvis’ wife, Ana (Lotte Verbeek) who is described to be a free-spirited and devoted wife.

Along the way, she will also get introduced to a charming and quirky scientist Jason Wilkes, played by Reggie Austin, who may even become her new love interest.

Peggy continues to investigate and “discovers that corruption seemingly runs deep, making it hard to distinguish the good versus the bad.”

One of the new characters in the show is Wynn Everett’s Whitney Frost who is a movie starlet, a brilliant physicist, and the power behind her husband Calvin Chadwick (Currie Graham). On the other hand, Calvin is a politician who will do anything to be on top. He will befriend Vernon Masters (Kurtwood Smith), presumably to gain valuable understanding on how the War Department works.

In preparation for the series’ return to the small screen, the network has also shared the looks of the mainstay cast showing their new styles and fashion.

Season two of “Agent Carter” is slated to air on Jan. 19.

'WWE Hell In A Cell' 2015 predictions: after victory against Demon...