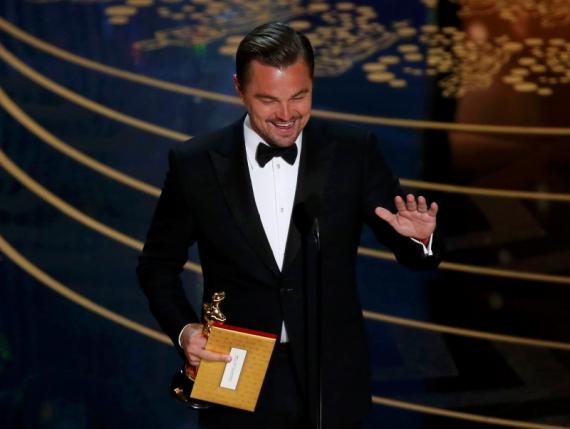 After six Academy nominations throughout his entire Hollywood career, “The Revenant” star Leonardo DiCaprio finally got his very first ever Oscar award.

As he delivered his acceptance speech, DiCaprio said, “Climate change is real. It is happening right now. Let us not take our planet for granted. I do not take tonight for granted.”

The win drew a loud cheer and a standing ovation from the Oscars crowd.

The last 20 years account for DiCaprio’s acting prowess. He received Academy nominations in the Best Actor category for the movies “The Aviator” (2005), “Blood Diamond” (2007), “The Wolf of Wall Street” (2014), and “The Revenant” (2016). His performance in “What’s Eating Gilbert Grape” (1993) earned him a nomination for Best Supporting Actor, and “The Wolf of Wall Street,” a film he co-produced, was also nominated in the Best Producer category.

“The Revenant,” directed by Alejandro Gonzales Inarritu, is a film that talks about the journey of one man into the wild and wilderness. DiCaprio told EW during an interview last year how difficult the entire filming was considering the weather conditions and scene odds that the actor had to face. It was reported that the director insisted that everything was to be shot using natural light. DiCaprio was also reportedly made to eat raw animal liver and sleep in an animal corpse to render a more realistic angle to the role.

“I was fascinated by Hugh’s journey. A man stranded in the wilderness after losing everything. Relaying that emotional journey and getting into his angst without a lot of words or interaction intrigued me,” DiCaprio said.

DiCaprio took home the Oscar and beat equally talented contenders Eddie Redmayne for “The Danish Girl,” Michael Fassbender for “Steve Jobs,” Bryan Cranston for “Trumbo,” and Matt Damon for “The Martian.” “The Revenant” also won in the Best Director category for Inarritu and  Best Cinematography.