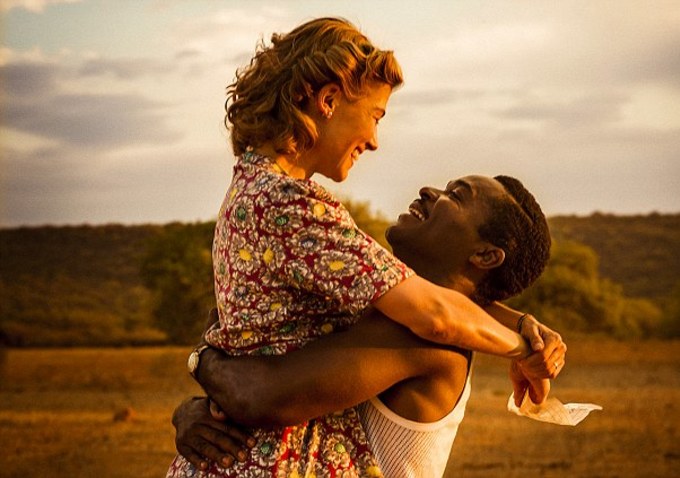 The first look of the film “A United Kingdom” shows “Gone Girl” star Rosamund Pike and “Selma” actor David Oyelowo in a scene depicting their characters looking blissfully in love.

“A United Kingdom” is about the story of Prince Seretse Khama, who became Botswana’s first president, and Ruth Williams, a white English girl. The two met in England in 1947 and were consequently married the next year. Their affair was an outrage and caused a great scandal that led the two to live in exile for six years.

Oyelowo learned of their story when he chanced upon “Colour Bar,” a book written by Susan Williams. The book became the inspiration behind the movie.

“I was so struck by the level of challenge they faced for simply falling in love with each other that I became completely intoxicated with it,” he told Entertainment Weekly. “I also realized in reading the story I had never seen an African love story of this cinematic scope. It spoke to me as an African, as a man, as a romantic.”

Pike signed up for the role when 20th Century Fox decided to scrap “The Deep Blue Good-by.” Oyelowo took the opportunity to persuade the actress to join the film.

He said, as reported by Entertainment Weekly in another article, “I went straight to my computer and I sent her images of these two people with the note ‘Take a look. Tell me what you think.’ She wrote me back the most impassioned e-mail: ‘I don’t know who these people are. I don’t know what they’ve done with their lives. But I’m so moved by them, tell me more.'”

Meanwhile, Indiewire reported that the Khama family are pleased that the story of Seretse and Ruth will be shared to the public. They likewise lauded Guy Hibbert, with whom they have closely collaborated with, for creating a compelling script.

A date has yet to be set for the premiere of “A United Kingdom.”