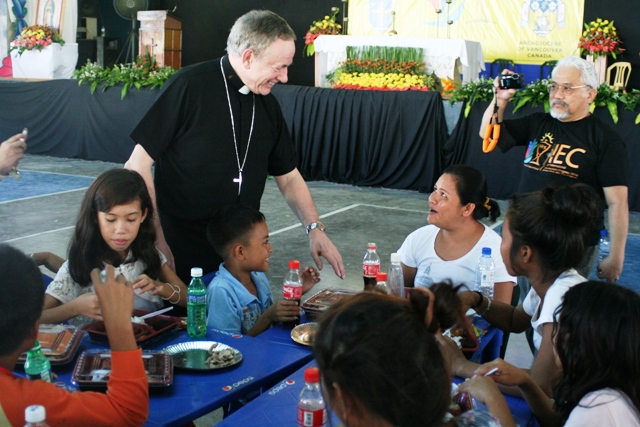 Over 1,000 identified poor people took part in the “Table of Hope,” which was one of the side events of the 51<sup>st International Eucharistic Congress held on Saturday at the IEC 2016 Eucharistic Village in Cebu City, Philippines.

The invitees are people living in dump sites and poor areas in Cebu City and the surrounding areas in the province. They were joined by delegations from Canada, Ireland, Hungary, Manila and from the local community.

The Table of Hope “symbolizes the feeding of the multitude by Jesus. It also follows the teachings of Pope Francis to have compassion, to share, to feed, to serve and to love the poor.”

According to Teresita Niksen, one of the banquet initiators, the idea came into mind last Sept. 19, 2015 during a meeting with Bishop Dennis Villarojo, who is the Secretary-General of the 51<sup>st International Eucharistic Congress.

“Bishop Villarojo wanted to give importance also to the poor and that they are given a dignified participation in the Congress. The Archdiocese of Vancouver then contacted the Archdiocese of Cebu and had Rev. Fr. Carmelo Diola, who is the Chairman of the Committee on Solidarity and Communion of the 51st IEC, to spearhead the project,” Niksen said during the event.

The event opened with a Eucharistic mass that had Archbishop Michael Miller, CSB, of the Archdiocese of Vancouver, presiding and was followed by the banquet wherein the delegates sat with the poor and shared a bountiful meal. The event closed with the giving of goodie bags to those who attended.

Aside from the banquet, other side events of the Congress were the IEC Theological Symposium; art exhibit; theater festival and the Sinulog Grand Parade with the IEC contingents.