Three students were injured when a teacher at a Northern California high school accidentally fired his gun inside a classroom while teaching a public safety class.

Dennis Alexander, a reserve police officer and a teacher at Seaside High School, was giving a lecture about public safety when the incident took place around 1:20 p.m. Tuesday. The teacher was pointing his gun at the ceiling when he accidentally fired it in front of his students.

Three students were injured by either bullet fragments or debris from the ceiling. According to police, no one sustained serious injuries.

“I look at my shirt like that, and then there’s like blood on my shirt,” said Fermin Gonzales, Jr, one of the injured students. “And then I like wipe my neck kind of, and a bullet fragment comes off my neck.”

Based on a statement from the Seaside Police Department, Alexander was believed to have been giving instructions related to public safety awareness when his gun was accidentally discharged.

According to Monterey Peninsula Unified School District spokeswoman Marci McFadden, Alexander was not authorized to have a gun on campus. District policy dictates that only school resource officers, or active law enforcement officers employed as security personnel in schools, are allowed to carry guns inside campuses. Alexander has since been placed on administrative leave from his teaching job.

“We have to have a safe environment for our kids and clearly in this incident it was not,” said school Superintendent PK Diffenbaugh. “Protocols were not followed.”

The California accident comes in the midst of a national debate over whether or not to arm teachers in order to prevent gun-related violence in schools.

In February, 17 students and school staff members were killed when a gunman opened fire at Marjory Stoneman Douglas High School in Parkland, Florida. Following the fatal incident, President Donald Trump proposed arming teachers so they can fight off any possible attackers. 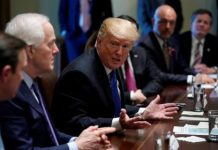