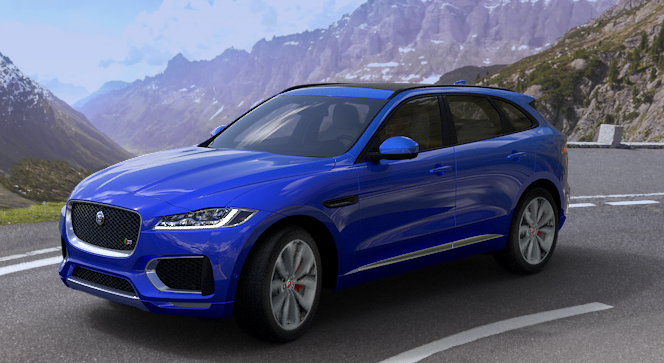 Jaguar unleashed a preview of its newest line up, called the 2017 Jaguar F-Pace, a sports utility vehicle, shown at the Frankfurt International Auto Show 2015. Although we are more familiar with the flashy, fast, and sleek sports car of Jaguar, this is indeed something different. Although it has veered from its usual line, it received positive initial feedback and got lots of people drooling with its still sleek design that is buffed up with a macho look a league of its own.

The sports utility vehicle comes with a grille in front, sporting its popular icon, with a nice headlight that complements the grille well. It also comes with lustrous and distinct wheels that make 2017 Jaguar F-Pace a hear turner on the road. Aside from its exterior, it also comes with the power of a 2.0-liter engine or a 3.0-liter engine. The 2.0-liter is a 4 cylinder 180PS Turbocharged Diesel Ingenium engine, which boasts a 4.9l/100km and carbon dioxide emission of only 129g/km. It has 180 horsepower at 4000 rpm and can thrust 0 to 60 mph in 8.2 seconds. On the other hand, the more powerful engine is a 3.0-liter V6 380 PS Supercharged Petrol and comes with 340 horsepower at 6500 rpm. It can propel from 0 to 60 mph in 5.1 to 5.4 seconds.

The 2017 Jaguar F-Pace comes in a five-sitting capacity with a 40:20:40 rear seat folding configuration. It is also proving to be passenger-friendly with the several safety features that it has such as Blind-Spot Monitoring with Cross-Traffic Detection, Active Cruise Control, as well as the new Adaptive Surface Response system for better stability and control on different surfaces such as snow or sand. In addition, it also promotes convenience with its Automatic Parallel and Perpendicular Parking as well as its Heads-Up display that helps in the navigation of directions, along with other important information such as speed limits and vehicle speed.

The 2017 Jaguar F-Pace seems to be indeed showing the best of both worlds for its design and functionality. It is anticipated around the fall of 2016 and may be approximately $50,000.