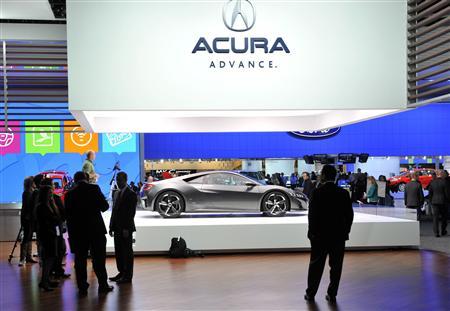 Car enthusiasts will be delighted to find out that the touted stylish luxury supercar is making a comeback in the market with the model dubbed as the 2017 Acura NSX.

According to Digital Trends, the Japanese automaker has unveiled the next generation vehicle back in January at the Detroit Motor Show and was originally scheduled to go on sale in fal,l but the release was pushed back to spring next year. The reason behind the delay is reportedly due to some engineering difficulties.

Reports claim that the upcoming version veers away from the original one as it will be equipped with a V6 engine that can deliver a powerful 573 horsepower and 406 lb-ft of torque. Majority of the capacity will come from the 3.5-liter gas engine while the remaining 73 horsepower will be from the batteries mounted on the rear and two on the front. They will also add another 70 lb-ft of torque to the mix.

When it comes to performance, the 2017 Acura NSX is boasted as a three-second car with a top speed of 191 mph. However, due to being a hybrid and multi-motor, it will not be lightweight and will have the scale reading at 3,803 pounds.

It will be equipped with the Super Handling All-Wheel Drive system that has been proven by consumers as one of the most trusted features available.

The exterior is said to be made from aluminum and Sheet Molding Compound, with the chassis having high-grade steel materials. The floor will be made of carbon fiber while owners may also opt to have the same stuff as roof and engine cover.

The pricing has not been released yet but it is predicted to have the base retail tag of $170,000 as it will compete with the likes of Porsche’s 911 Turbo, Audi’s R8 V10, BMW’s i8 and Jaguar’s F-Type SVR. The vehicle will be made at Honda’s new facility in Marysville, Ohio.