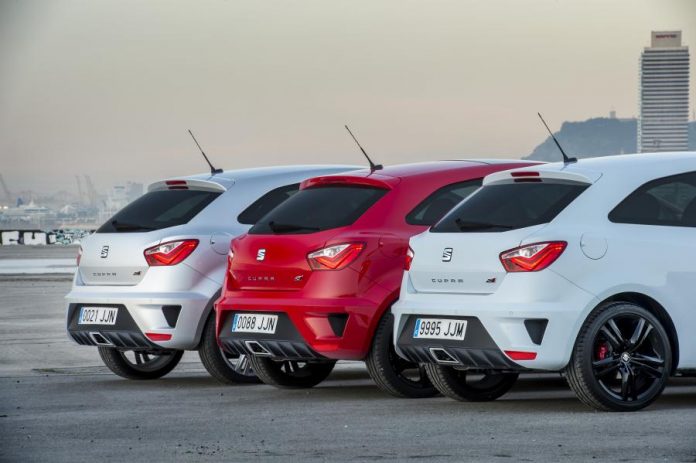 Automaker SEAT has unveiled the upcoming three-door hatchback sports car dubbed as the 2016 Ibiza Cupra with the promise of outstanding performance and state-of-the-art technology.

In an official press release, the company’s president, Luca de Meo, said, “The new generation of the Ibiza CUPRA displays the strong character of the SEAT brand. With its unique design and its exceptional performance, the Ibiza CUPRA is the epitome of sheer driving fun.”

“SEAT is a brand in motion and the Ibiza CUPRA is one of SEAT’s icons. Innovative connectivity, a significantly upgraded interior and further improved quality are just a few key areas that demonstrate how fast and consistently our brand is moving,” he added.

Touted as the model that is suitable for everyday use, the Ibiza Cupra has the new 1.8 TSI engine under the hood just like the Volkswagen Polo GTI. It only weighs 133.4kg. The engine is coupled with 6-speed manual transmission, turbocharger, and combined direct/indirect injection for a more refined performance of 141 kW or 192 PS, putting it 12 percent higher than its predecessor. It also has uprated torque from 250nm to 320nm across a wide rev range of 1,450rpm to 4,200rpm.

Going from 0 to 100 kph takes about 6.7 seconds while the top speed is listed at 235kph. The fuel economy is said to be at 47.1mpg for combined city and highway driving.

It comes with two driving modes, comfort and sport, which allows for improved handling characteristics integrated by XDS electronic differential locks. The diameter of the brakes have been increased from 288nm to 310nm. For added safety measures, ESP electronic stability system has hill start assist, multi-collision brake, tire pressure warning, and drowsiness warning.

Inside, the Ibiza CUPRA has been upgraded to have both precision and functionality as reflection of the city of Barcelona, Spain. It has Leon family-made steering wheels, air vents, soft-touch upholstery and infotainment system.

Other features include the ability to connect the screen display to satellite navigation, access MirrorLink, Apple CarPlay, Android Auto compatibility, and ConnectApp powered by Samsung.

The 2016 SEAT Ibiza Cupra will become available in the United Kingdom in January next year for the base price of 18,000.