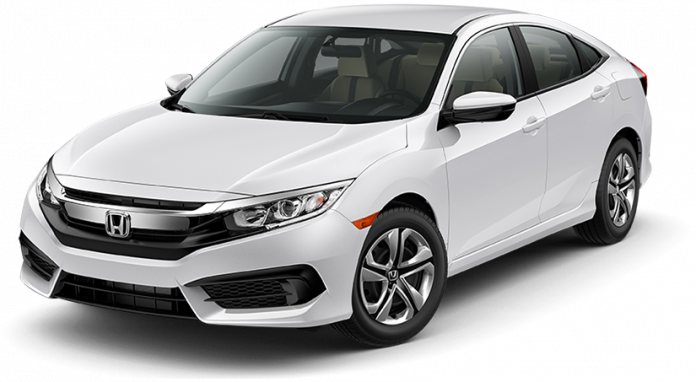 Honda promises “excitement” when it launches 2016 Honda Civic. Referred to as the 10<sup>th generation Civic, Honda is set to launch a varied line up comprising a sedan, Coupe, 5-door model, Si, and the new type-R, all boasting its newest sporty look. The sedan model was debuted last fall, followed by an anticipated Civic Coupe in winter, and the five-door hatchback, Si, and Type R in 2016.

The 2016 Honda Civic sedan comes with LED lights in front while the rear side shows C-shaped tail lights, emphasizing the look of the car. For its back doors, there are two additional windows to contrast the rear roof line angle.

For its interior, the new sedan has lowered its ride perhaps for a more sports car feel. It has improved the materials used for the seats and other interior materials compared to the 2015 Civic. Overall, it also has a wider capacity to house even taller frames in the Asian car with its wider leg and head room.

The 2016 Honda Civic also throws in additional convenience features such as the starter using remote engine, a climate control feature, wireless phone charging and display audio for Apple Car Play and Android Auto, as well as safety features such as lane assist and adaptive cruise control. Aside from these, the 2016 Honda Civic also has the new Honda Sensing feature that enables the driver that aids in anything that might be missed on the road.

The EX-T, EX-L, and the top of the line Touring variants come in a turbocharged engine, along with a 1.5-liter direct injection, along with a CVT automatic transmission. The fan favorite, the LX model, comes in a 2.0-Liter DOHC i-VTEC 4-cylinder engine that runs on a six-speed manual transmission or an option of CVT automatic transmission, retailing starting at $18,640. It runs on an estimated miles per gallon of 31 for city driving and as high as 41 miles per gallon for highway driving.

The new 2016 Honda Civic sedan is trying to prove that it is a great choice not only for both for its external look and under the hood, but also for its fuel efficiency.