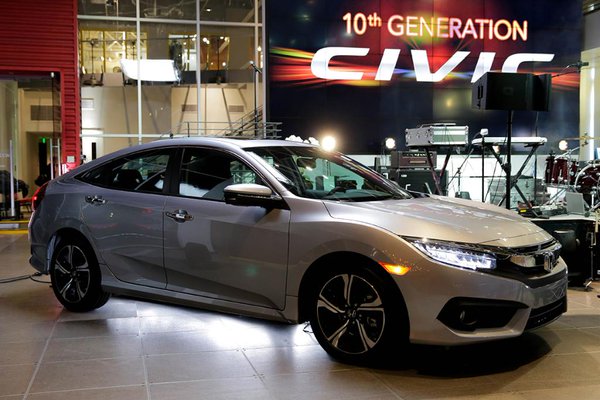 Honda has confirmed that it will be unveiling the 2016 Honda Civic Coupe during the 2015 Los Angeles Auto Show which will start on November 20.

The Honda booth will, however, be open to media as early as November 18.

According to a press statement from the car manufacturer, the new Civic Coupe is the second in the line of 10<sup>th generation Civic models that will be released in the next 18 months.

The Civic Coupe, according to the release will showcase sportier lines compared to its predecessor, the 2016 Civic Sedan and focuses on sporty performance, ride refinement and cabinet quietness for a great driving experience. What’s more, the Coupe also features innovative fuel efficiency and safety performance which is powered in part by two all-new powertrains, including a first-ever turbocharged powerplant for the U.S. Civic.

Meanwhile, the prestigious Kelley Blue Book has named the 2016 Honda Civic as its Best Buy after evaluating some 300 car model releases for 2016.

The car valuation and information company, considered by many as a leading authority on all things involving cars, assessed the models based on factors like pricing, five-year cost of ownership, as well as consumer reviews and ratings, reported Detroit News.

“Our group of expert vehicle testers chose the totally redesigned 2016 Honda Civic as the overall winner in our Best Buy Awards because it sets a new standard in a segment already known for delivering great value, providing an up-level experience to drivers and passengers in every facet of the driving and ownership experience,” Jack R. Nerad, executive editorial director and executive market analyst for Kelley Blue Book, said in a statement.

The Civic is priced at less than $20,000 and was also honored for its design, above segment interior and innovative technology use.

Former President Jimmy Carter to be treated for brain cancer